Shortly after Aaron and I had received a call from our doctor informing us about our fertility, I asked Aaron for a blessing. My head was all over the place. I felt good, I felt afraid, but mostly I felt like I finally looked down and the ground was strange and unfamiliar. I didn't know where I was. I wanted peace, I wanted comfort. But secretly I wanted a timeline. I wanted Heavenly Father to say to me, "Here is how short or long this will take." I felt like if I knew what my timeline was, then I could power through and handle the situation with more perspective. But I knew that wasn't how things worked. You never know your timeline, ever.

Aaron said some beautiful things. Urging me to focus my attention on the other responsibilities that I had and reminding me that I needed to be participating in those things. I gripped my seat and waited for my timeline. I wanted it, even though I knew it wasn't going to be given. Short? Long? Rough terrain? I felt like I was whisper-shouting those words despite never actually saying them. Aaron paused for a moment. Then he said, "the Lord works in mysterious ways." I let out my breath, not realizing at the time that I was holding it in. My shoulders slumped a little. He finished the beautiful blessing. I wiped my tears and hugged and thanked him.

The words "the Lord works in mysterious ways," swam through my head. They felt heavy and gave me no bearings as to where I would find the light at the end of the tunnel. I felt defeated in my timeline desires. I felt selfish. I looked at the road ahead and took the first unknown step forward.

I still felt lost and confused. My emotions ran all over the place. But I put my mind elsewhere, focusing on my other responsibilities. Moving forward.

What I didn't realize at the time, was the statement, "the Lord works in mysterious ways," was in fact a very specific answer, despite my feelings of it being extremely vague.

It was the statement that would explain the positive pregnancy test that I held in my hand shortly after being told we had a fertility related issue. 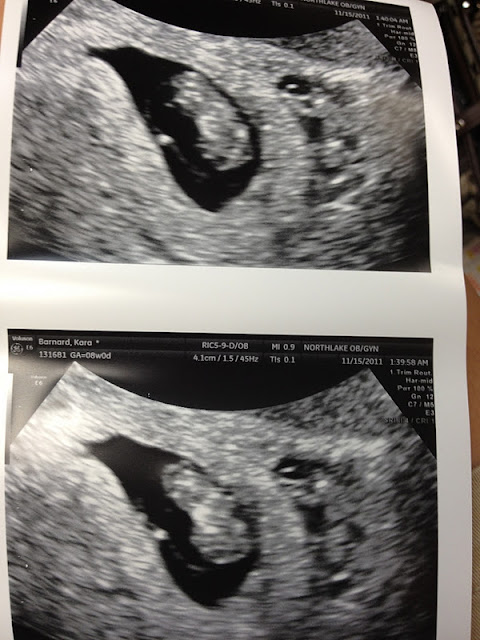 We are excited, humbled, thrilled, and extremely extremely grateful for this little baby. And we are living proof that the Lord does, in fact, work in mysterious ways.
Posted by Kara at 3:25 PM

Congrats! SO happy for you!

Congrats! That is awesome news!

Congrats!! So glad you are getting your little miracle baby! We are loving ours. Grace will be such a great big sister.

Congratulations. We're so, so happy for you.

Yaaaaaaaay! I have been praying for this for you guys. Congrats! Grace is going to be an awesome big sister. (In your last entry, when you mentioned Tylenol every 4 to 6 hours, in my head, I was like "hmmmmm....")

Well said, Kara. You have a gift for writing. I love you!

Congrats! So very thrilled for your family!!! Hope you are feeling well! and that the months fly by!

I love this news!

Glad the news is out! I can't wait to meet that new niece or nephew of mine!!!

Sooo happy for you!

You have me in tears!! Congrats, I am so happy for you. You have wanted this for so long and the best things are worth waiting for. Yeah!!

Oh Kara, you have no idea how extremely happy this makes me! I LOVE this post, and I am so grateful that prayers have been answered for baby B. #2 to come along for you guys. I am so excited to follow along on the journey via the blog world-it will be just as exciting for me as Grace baby was! Thank you for sharing your wonderful news! I cannot express enough how fabulous this news was to me this morning!

um...this is shan. not ryan. only I'm sure he is just as excited for you guys :)

So happy for you Kara. Your post was beautiful and inspiration.

So important to remember who's in charge -- and so grateful it isn't us! lol.

This is so wonderful! The SAME thing happened to me! I found out we had a fertility issue then a month later found out we were pregnant. It has made me so grateful for our little one! Congratulations!

So happy for you! Grace get's a play mate♥

This is WONDERFUL news!! Congratulations! You are a wonderful mommy and this is one lucky babe.

I just did a little yelp of excitement for you. Iam so happy for you guys, CONGRATS!! I can't wait to talk with you all about it. And just to tell you how happy I am, I am heading off to Choir with a smile on my face...that has NEVER happened.

That is amazing! SO happy for you guys! Hope this pregnancy goes well for you.

THis is THE best news ever. I am so excited for you. What a little miracle. This makes me so happy. Mysterious ways indeed! I hope you are feeling well. Hooray hooray hooray!

That's so great! We're learning through different circumstances that our lives really are in the Lord's hands. I really appreciate the thoughts about wanting a time line and mysterious ways. Anyway, congratulations!

Kara- Congrats! I'm so excited for you! I know how hard it was waiting for this pregnancy! What a blessing it is! I'm sure Grace will be an amazing older sister! I look forward to hearing about everything on your blog! Hope you're feeling good!

so so great! so excited for you guys!

Love you Kara! I can't wait to meat the next Barnard.

Prayers have been answered. Congratulations!! I am SO very happy for you and your family! :)

Yay!!!!!!! Congrats girlie. I am so excited for you guys. The Lord really does work in Mysterious Ways, and in His own time. Gracie is going to be such a great big sister!

Yay!!! That is so wonderful, kara! I'm so happy for you guys! Can't wait to see how your pregnancy and everything goes with having two kiddos! Congrats again!

I just started crying!! I am so sure Heavenly Father is cradling you and baby Barnard in his arms. This child is so blessed to be born into your family. xoxo

Congrats Barnard family! You have so many people praying over you, how amazing!

That is SO wonderful! Couldn't be happier for you guys!!

Wow, I am waaay behind on your blog right now (and I'm really sorry about that, but it's not just you! I have some serious blog surfing to catch up on!), but man what a good post to happen upon as I start catching up. I am very excited for you both! Grace and your future children are so blessed to have parents who are so prepared to have them here and who love them SO much. Thanks for your example! While it is so difficult to be patient sometimes, the Lord is so aware of us and knows exactly what we need to experience to become more like Him. I can tell that motherhood is so sacred to you, and the world needs more women like that :)

Yay! So excited for you and your growing lil fam!