There's a good reason why we call Grace's teeth her "David Lettermens."
Exhibit A: 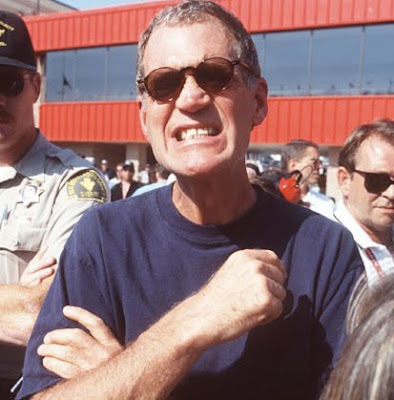 Exhibit B:
She did this face all on her own. 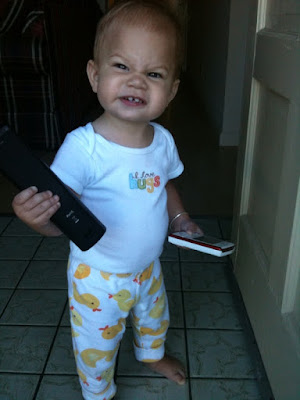 In between bouts of the most evil flu bug ever, Aaron and I managed to salvage our Labor Day weekend by heading down to Carmel.
No crowds, gorgeous weather, the beach. Recipe for pure joy? Yes. 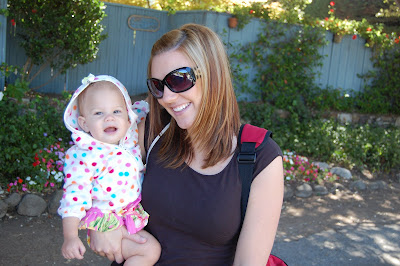 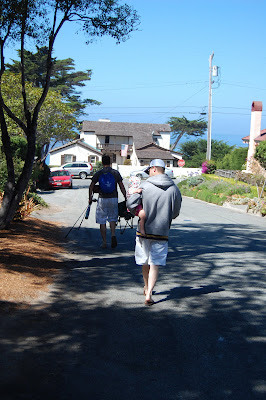 The boys and Grace posing with Pebble Beach in the background. 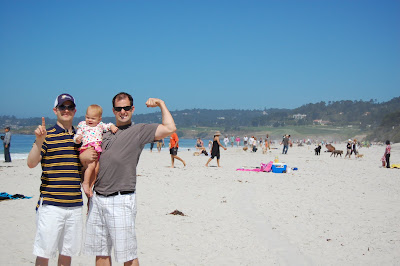 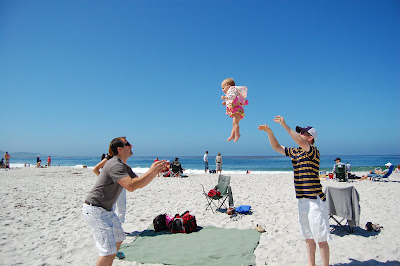 Seriously, look at that face. 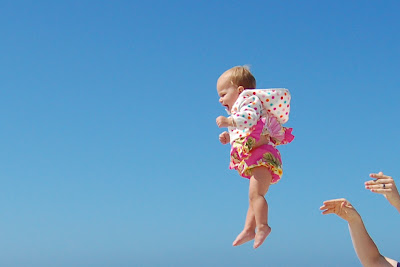 Grace loved all the dogs running around. She would "Woof, woof" every time she saw a dog. 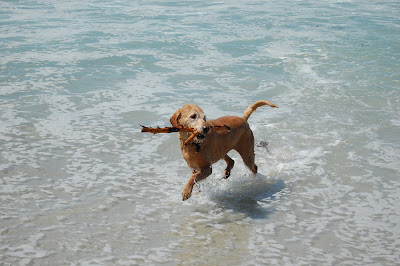 The water was a little cold 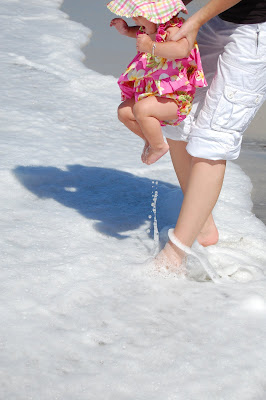 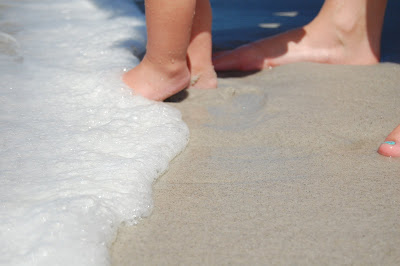 I could kiss the Sager's feet for introducing us to this gorgeous place. 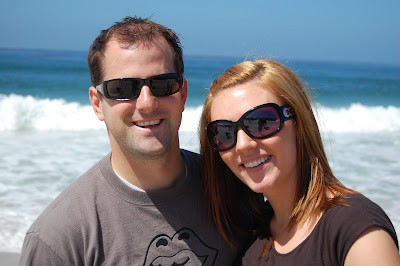 We will definitely be returning 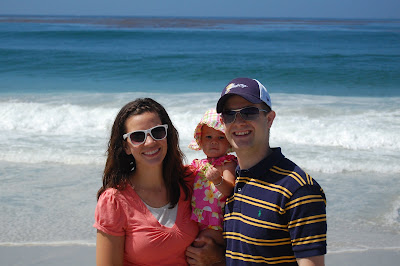 Today (I guess technically it was yesterday) was a day of remembering. Something, I'm sorry to say, I didn't remember until I was on facebook. With status updates of "Never Forget" and "Always remember" I realized that it was in fact September 11th. I toyed with the idea of posting a status update myself that would prove how patriotic I was and how much I cared, or how much I wanted people to think I cared. But, my fingers just hovered over the keyboard and I closed my computer, and forgot about it.
It wasn't until later in the day when, yet again, I was on my computer and I saw the old pictures. The ones that were taken 9 years ago and I realized that I wasn't forgetting what day it was, I was pushing out of my mind. I didn't want to remember September 11th, 2001. I didn't want to remember the one event in my life where I can say "I know what I was doing when that happened." I didn't want to remember the feeling I had watching the TV screen at school and seeing on live television the second plane crash into the other trade tower. The moment when it went from freak accident to terror attack. I didn't want to remember how chaotic and blurry the rest of the day was. How it felt like a weird montage from a dramatic TV show, with blurred edges and time flying. Parents rushing into school and pulling their kids out. Teachers and students glued to their TV sets. Kids in the hallways saying "My Dad works in the Pentagon, I can't get a hold of him." Getting home and watching the same footage over and over and over until I had each clip branded into my memory. Feeling like I wanted to escape and retreating to my room at 5pm and falling asleep for 15hours.
No, I didn't want to remember.
But, along the same lines as those horrible memories, the ones I tried but couldn't actually forget, there were incredible memories. Waking up after my semi-hibernation, proud to be an American. Proud that there were men and women willing to run up burning buildings knowing they probably wouldn't come out alive. Proud to honor heroes in a plane who sacrificed themselves in the fields of Pennsylvania to save innocent people. I was proud to hold a candle outside my house the next day to honor those to had fought and those who had fallen. It felt amazing to know that all the biases that plagued day to day living, the petty crap that people fought about in America all crumbled away as we stood together. Americans willing to fight, once again, for their freedom, their safety, their people.
Yes, of course, I remember. I will always remember. It might not be on the forefront of my mind. I might not always want to rehash the bad to remember the good. But, I will always remember. I am an American, and proud to be so.
Posted by Kara at 2:32 AM 3 comments:

I recently learned how to use iMovie and I'm a huge fan. I didn't take a lot of pictures on Grace's birthday, but we did use our Flip quite a bit. So instead of a picture post you're getting a video post.
There are two things you need to know before viewing this video.
1.) The song we are singing to Grace in the middle of the video is the Baskin Robbins "Ice cream and cakey cake" song that was stuck in my head when I was in labor with Grace. We changed the words to "Ice cream and Gracie Kate" after she was born and if you know us at all, you know that we sing it to Grace all the time.
2.) I never thought in my wildest dreams that Grace would react to her cake the way that she did.
Posted by Kara at 11:47 AM 11 comments:

I know that you're dying to know what Mr. Nutter (our squirrel buddy) is up to.
When we last left Mr. Nutter he had found a home in Arizona. Apparently he didn't like the heat. My Dad posted this photo along with the following message:
"Imagine my surprise at finding a STOWAWAY in my luggage! Apparently, Mr. Nutter was tired of the dry desert heat of Arizona and hitched a ride to the rolling hills of Virginia. Welcome to the REAL South Mr. N!" 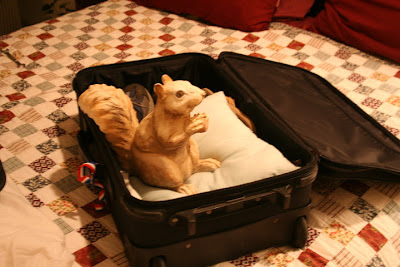 He has been Squirrel-napped once again. Where will he go next? Or I should say, who will steal him next?
Poor Mr. Nutter...
Posted by Kara at 12:02 AM 2 comments:

I can't sleep. I struggled with the same problem on the very same day a year ago. The last few minutes before I fell asleep knowing that my world would never be the same. I know tomorrow that my baby will no longer be my baby, but will be my toddler, my little girl.
I'm so sad to see her baby days go. I want to remember every moment, soak up every memory and take nothing for granted. I want to remember the way she felt curled up on my chest, the way I cried every time she cried, the way we laughed when she peed on our comforter, the way it felt the moment we walked out of that hospital and it finally hit me that she was mine 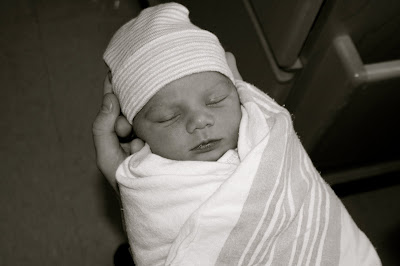 I've grown a whole lot in these 365 days of Gracie. I was pushed to limits that I didn't know existed. I've felt a mix of feelings ranging from good to bad but always trumped by the fact that a piece of my heart resides in that tiny little body. No amount of frustration, annoyance, or exhaustion could make me love her less. She is mine, I am hers. We're bound in this crazy life and I love that.
I snuck into her bedroom about 47 times tonight just to watch her sleep. Most of the time I replayed the memories of those 11 months in my mind. The good, the bad, the ugly, you name it, I replayed it. I wanted to be there in the moment soaking up every last little particle of Grace's "babyness." The last moments before we moved onto the next phase. There was no rush. Just the sound of Gracie slowly and steadily breathing in and out.
I know that there isn't a magic moment where the clock strikes midnight and my baby magically turns into a toddler. Tomorrow will be just another Thursday in September. A day that will go on as usual. But it will mean the beginning of something new and something incredible for Grace. The next phase. Toddlerhood.
Oh hey, its 12:22am
Happy Birthday Gracie.
Posted by Kara at 1:50 AM 6 comments:

There are many happenings going on with the Stringham family these days.
The same day that Lily was born my gorgeous sister Stacey got engaged.
We are so happy for them and we're really excited to have Cade be part of our family. 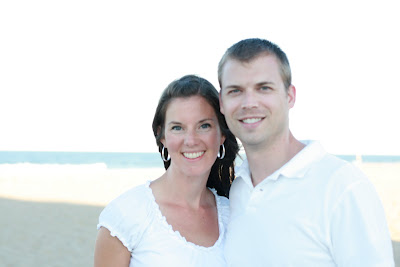 Congratulations Stacey and Cade!
Posted by Kara at 11:48 AM 6 comments: