The Book of Mormon

I was born and raised a member of the Church of Jesus Christ of Latter-day Saints, or as most people would say, I am a Mormon. Being born into this environment, the traditions, if you will, of our church were commonplace to me. However, recently I have been thinking what our church must look like from an outsider's perspective and I came to the conclusion that it must appear to be quite odd. I focused my train of thought on the Book of Mormon.

Do people think the Book of Mormon is some sort of handbook on Mormons? A ridiculously long statement of rules and regulations to live by? If so, I can actually see where the confusion comes from. Since people in our church and outside of our church refer to members of the Church of Jesus Christ of Latter-day Saints as Mormons, the name, the Book of Mormon, might lend itself to some serious confusion. The Book of Mormon is moreso similar to a book in the Bible, as in, the Book of Matthew. So you can take the book of Matthew and call people who read and study it as "Matthews". They aren't people that worship Matthew nor are they the people of Matthew that following the rules and regulations contained within it's pages. Calling these people "Matthews" is obviously just a nickname, just as the term "Mormon" is a nickname.

The Book of Mormon in structure and content is very similar to the Bible. In fact the Book of Mormon works in conjunction with the Bible and not as a replacement for the Bible. In our church we read and study both. Within the Book of Mormon you read and learn about a people that started in Jerusalem (around the time of Jeremiah- from the Bible) that traveled away and across the ocean. The book spans hundreds of years and is full of different chapters with different authors, different prophets. Mormon, the guy that the book was named after, was one of the main compilers of the book. Taking all the different writings and putting them together. He plays a major role in the book but he is not the only author.

I have been reading and studying the Book of Mormon and as I have been doing so I have been thinking that there are a lot of people that might not even know what it is or what is inside it. Purely for curiosity's sake I figured I would say, on the surface, what it is. It reminds me a lot of a personal journal of a people from a long time ago. It is fascinating from a historical perspective. I love it for other personal and spiritual reasons.

Mormonism, in my opinion, isn't a widely understood religion. One could google it, but from my personal research in that department the stuff that comes up either makes me angry or just plain sad. So if you're curious at all about the Church of Jesus Christ of Latter-day Saints, or the Mormons, and what it even is or does, you are more than welcome to ask, because I'm a Mormon.
Posted by Kara at 9:40 PM 2 comments: 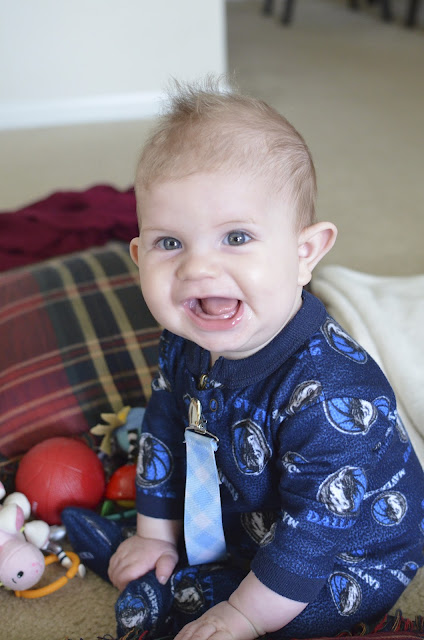 It is at this stage that I'm starting to realize how different Grace and Christian were as babies. Their personalities have always been different, however, at this phase the differences are more apparent. By the time that Grace was 7 months old she was army crawling, sitting, and just learning to stand. Christian is just now mastering the sitting (with a hefty amount of pillows for protection), rolling, and turning in a circle on his tummy.

Grace was a busy body. Always wanting to move, touch, explore, wiggle. Christian is content to snuggle, play quietly, and roll. Grace was exploratory, and Christian is content. Grace learned to arch her back around three months and rarely wanted to be held or snuggled, and she never, ever, fell asleep in my arms. Christian loves to be held or to sit on my lap. He falls asleep in my arms with no problem (which makes going to church and nap time overlap much easier).

Although I am making a comparison between the two, there isn't one type of personality that is better than the other. They are just different. I can already tell that the tactics I would use with Grace as a baby are not the same ones I need to use with Christian. My independent fire-cracker girl, and my sensitive mellow guy are helping me to grow and to learn. They are helping me to see already that their lives will be different despite coming from the same two parents, they will love differently, laugh differently, grow differently. But no matter how opposite they might seem, I will love them both just the same.

More facts about Christian Clark:
-His hair grows in such a way that would lead one to believe that he is growing it for the sole purpose of having a mohawk. I have tried to fight this inevitable hairstyle, seeing as I think mohawks and babies don't really go together. I have attempted on many occasion to just brush it to the side. But it just looks like a mohawk combed over. So I succumbed to the mohawk and I can't tell you how many people comment on it when we're out and about. 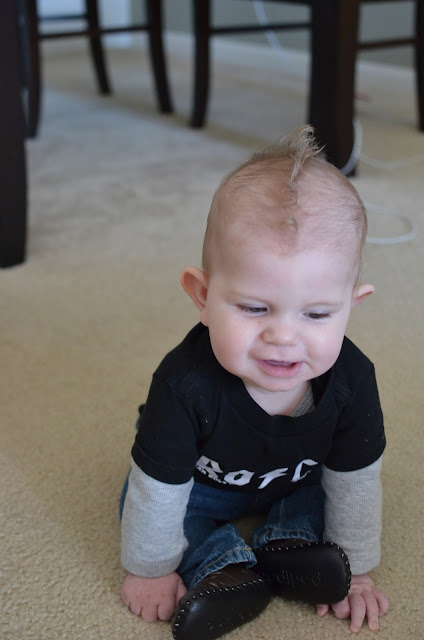 -When he is happy he kicks is feet. Like when a puppy wags its tail uncontrollably, thats what his feet do. We can always tell he is awake from his naps, or first thing in the morning, when we hear him kicking his little feet.

-His first tooth, bottom right, is starting to make its entrance. It hasn't broken through yet, but I can definitely feel a bump.

-He loves to be swaddled and to lay on his back

-His fingernails grow at a ridiculous rate. I swear I am trimming those things constantly.

-He sleeps in a pack'n'play in our closet or Grace's bathroom. We tried putting him and Grace in the same room after our trip to Utah but they woke each other up at least three times a night. Thus the closet location.

-Most people tell me he looks just like Aaron

We just love this boy of ours. He has been such a wonderful addition these past seven months. Happy 7 months CCB!
Posted by Kara at 4:24 PM 3 comments: 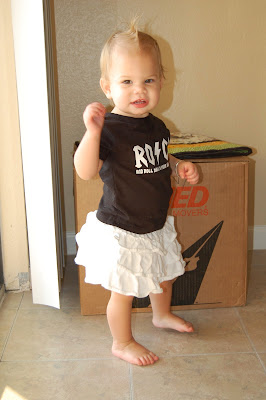 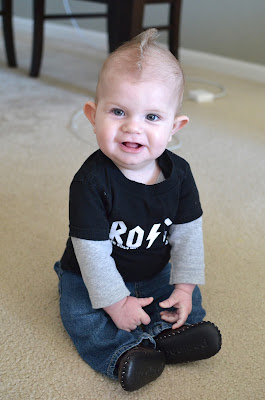 Aaron did training with his new company, after we first moved to Texas, in Ohio. He brought back a shirt for Grace from the Rock and Roll Hall of Fame. In the picture on the left Grace is 14 months old, wearing the shirt that Aaron got for her. I set this shirt aside when I was pregnant and going through her clothes, knowing that I could use it for a boy. Christian was 6 months old the first time I put him in it. He is almost 7 months old in the picture on the right. As I squeezed his little body into the shirt (wondering if spraying cooking oil in the sleeves would help him fit) I was shocked that Grace was twice his age when she wore this shirt. Yet another difference in these two kiddos of mine. One of many. However, at a young age they both learned to Rock On.
Posted by Kara at 2:35 PM No comments: