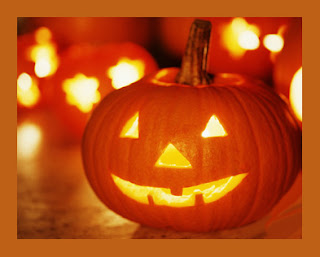 I hope you have a wonderfully spooky day! Happy Halloween.
Posted by Kara at 3:11 AM No comments:

Aaron just took the Business section of his CPA exam today, so no more studying!! He has 3 sections down with one left to go. We won't find out if he passed this section for a few weeks, but at least for now he is taking a break from studying. I'm so glad to have him back!

Aaron also pointed out that i needed to make a correction to my last blog post. As you can see in the previous post i displayed the picture of "Wiley's" CPA study guide. Aaron said that Wiley's is for sissies and that i should change my picture to the Becker review, which is the review that he's actually using. Here you go sweetie, I'm proudly displaying the Becker picture for you. 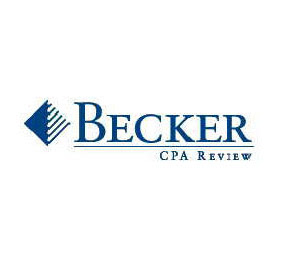 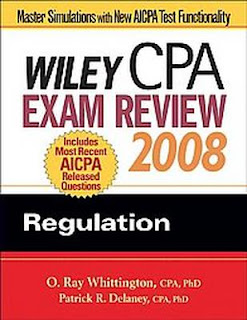 I'm sorry to say that we can't be friends right now. You are causing me to only see my husband for about 20 minutes a day and when i do see him, he is either worried about studying for you or he is about to fall asleep because he has been studying all night. Not cool. Please give me my husband back as soon as possible. Thanks!

When i was searching in google images for "CPA Exam" this picture came up. It made me laugh. 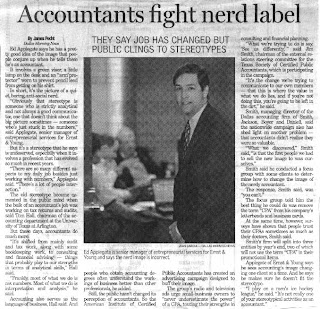 Based off the picture of the guy on the front, who i can only assume is an accountant, they are definitely losing the battle against the nerd label. (does anyone else think he looks like a nerdy Adam Sandler?)
Posted by Kara at 9:56 PM 3 comments: 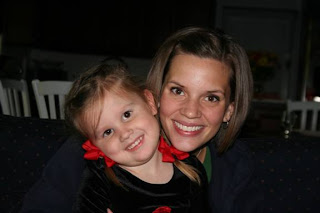 Today i called home to talk to my sister. When the phone picked up i could hear music in the background and an animated voice talking about Dora the Explorer. A few seconds passed by and i heard Carly say hello. I was caught off guard because whenever i call Carly never wants to talk to me on the phone. This girl cracks me up. We spent a good twenty minutes talking on the phone about halloween (she's going to be a black cat), Pumpkins (she sang me the 5 little pumpkins song.... i was impressed), what she does in kindergarten, what she likes to eat at the cafeteria, and the list goes on and on. How many five year olds talk that much on the phone? I loved it. The best part was when i asked to talked to my mom or my sister she sets the phone down and yells "Mema! Mom! Kara is here, does anybody want to talk to her?" My mom and sister both had no idea that i had called and thought that Carly had been talking to herself the whole time. My nieces and nephew are awesome, i love being an aunt.
Posted by Kara at 10:15 PM 1 comment: 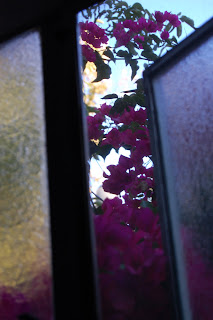 In our apartment we don't have air conditioning, so while we're in the shower we have to open up the window in order to prevent serious steam build-up. This is what i see every morning when i'm in the shower. I love it. I'm not a morning person, but the flowers always put a smile on my face. Its a great way to start the day. Thank you California for having awesome weather even in the middle of October.
Posted by Kara at 10:36 PM 5 comments:

Matt is currently moving from Eugene, Oregon back to Virginia and on his way home he decided to make a few pit stops, one of which was to San Jose. It was so much fun having him here. Even though he was only in the area for three days we made the most of it and there are lots of pictures to prove it.

Sunday: We went to church, had a very large brunch and we watched a lot of football. The boys were wonderful and did the dishes for me. Later that night i buzzed the boys hair. I felt very Mom-like. 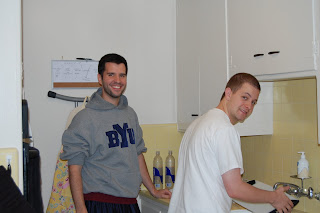 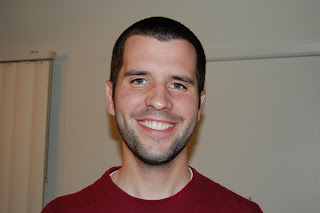 Monday: Aaron headed off to work (it was the first day of his busy season, scary) and Matt and i headed up to San Francisco to see the sights. I was really excited because this is the first time that i have ever been to San Francisco. Our day began with a picnic in Alamo Square park, aka the park where the Tanner family (from Full House) has a picnic in their opening credits. Please feel free to start singing the theme song from Full House. We sang that song the ENTIRE day and it has been stuck in my head ever since. 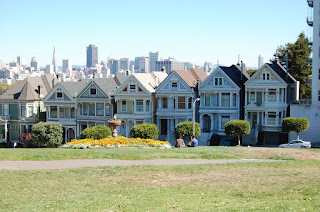 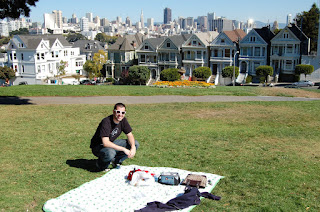 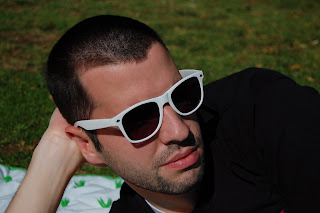 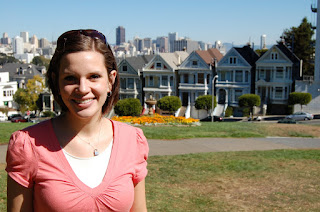 We then Drove down Lombard Street on our way to the Golden Gate Bridge. This street is nuts. Its the steepest hill i've ever driven down, and you come up to stop signs and you're at a 45 degree downward angle. 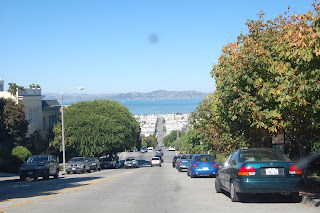 Driving across the Golden Gate bridge 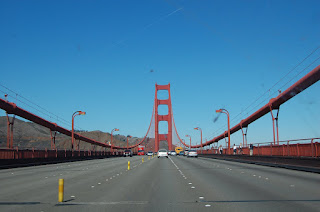 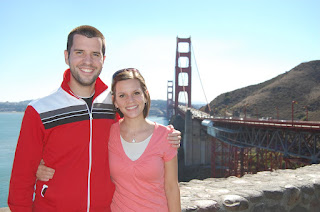 A view of downtown San Francisco 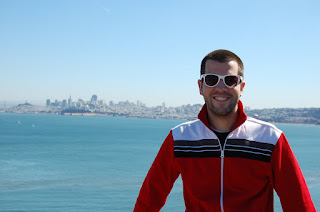 A sailor statue at the lookout place 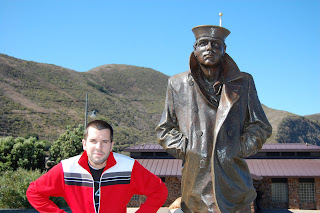 After the Golden gate bridge we headed down to Pier 39. We got to see the seals that all get together by the dock. The ones that were awake were really loud, and these suckers STANK. But it was really funny to watch them all hang out and sleep. 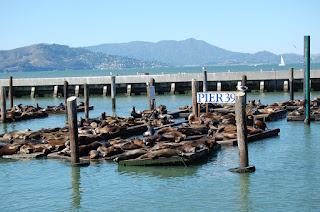 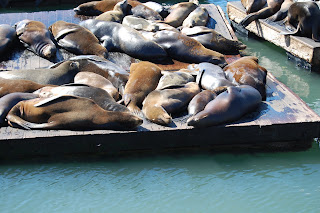 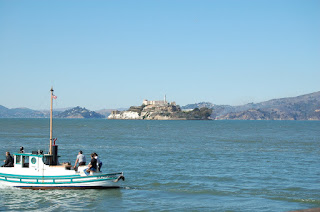 I wanted to get on one of the trolleys and take a picture but we weren't sure what the deal was and why they were just sitting around, and we didn't want to pay to ride one, so i just snapped a picture of one. 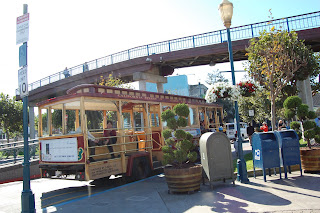 Tuesday: I went to work in the morning and when i was done Matt and i headed up to the Oakland Temple. 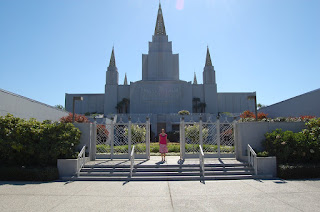 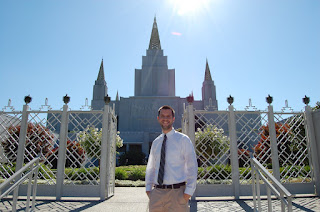 Later that night we watched X-Men and Pirates of the Caribbean with RiffTracks. RiffTracks is a group of comedians that watch movies and make fun of them. They record their jokes and you can buy them and download them onto your itunes then watch the movie and listen to the track. Its hard to explain but it comes from the same people that did Mystery Science Theater 3000. It was hilarious and i highly recommend them! Matt and Aaron are enjoying the movie and witty banter. 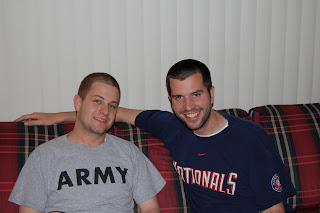 Wednesday: Matt packed up his things while i made a big breakfast for his send-off. 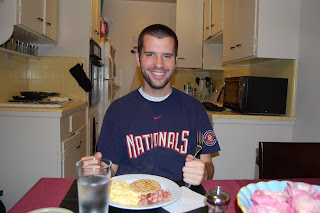 I was really sad to see matt leave this morning, three days were definitely not long enough. Thanks for a great weekend matt!
Posted by Kara at 11:12 PM 1 comment: