Well, Ceece is about 4 days shy of turning 10 months, so posting about 9 months now is better late than never, right? My blogging is backed-up to February. I have yet to blog about Valentine's day, Aaron's birthday, and our trip to Virginia. I'm hoping at some point those events will all make it on here. Emphasis on hoping. But, in the time being, at the request of my lovely, always beautiful, sister-in-law Rachel, I'm making an attempt to get back into the blog-o-sphere.

So let's talk about this boy. Because, if I'm being honest, I'm totally obsessed. He is the sweetest kid. If you smile at him he'll smile back and then bashfully bury his face in the neck of the person holding him. 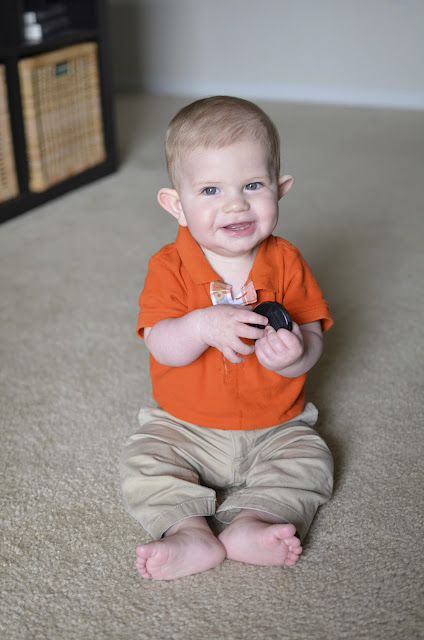 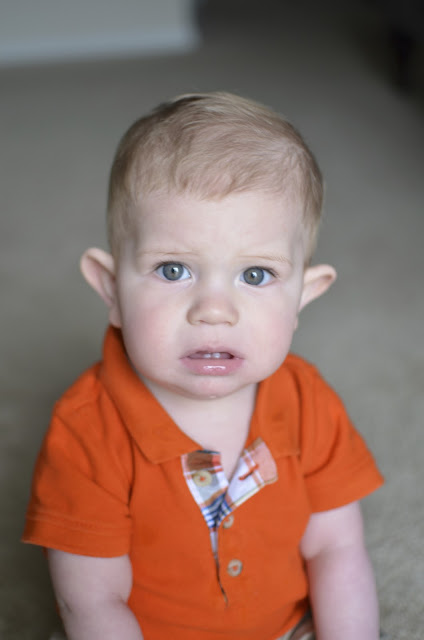 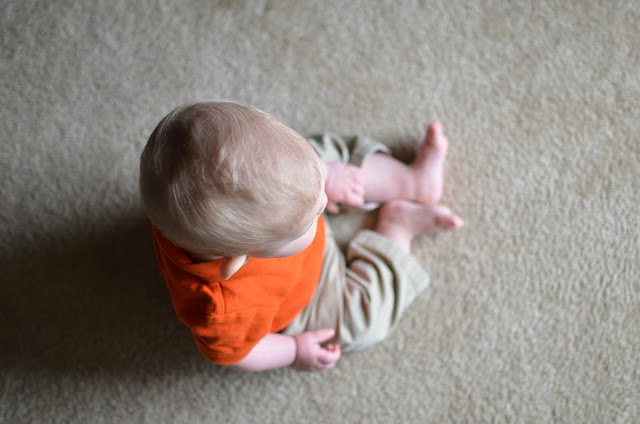 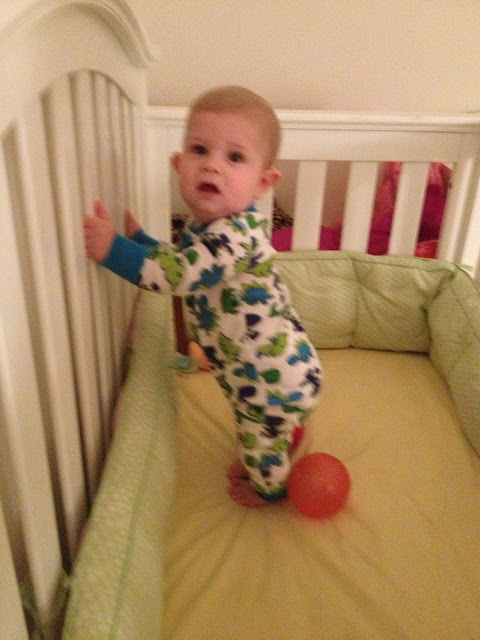 He had started to sleep through the night around 8 months, but at 9 months it was consistent and so incredibly wonderful. Although he still is sleeping in our closet.

He also would follow us prompting him. We'd wave and say "Bye Bye" and he would wave his fingers and repeat "Ba Ba." Its pretty much the only thing he can repeat (aside from Ba Ba Da Da- bye bye Dada) but we'll take what we can get. 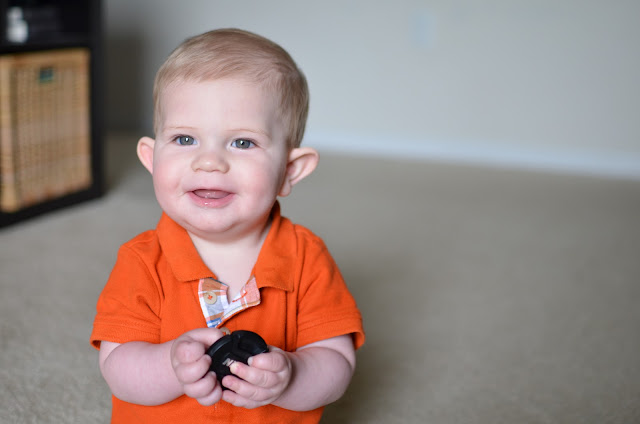 We love this boy!

Happy 9 Months Christian Clark
Posted by Kara at 9:10 AM 1 comment:

I am not one for contention. In fact, I quite dislike it. Tension in any situation makes me feel very awkward. I tend to avoid those situations at all costs. When it comes to the "fight or flight" mentality, I always, without fail, choose flight. Why battle it out when you can run away to a safe place all the while calling out, "Problem? What problem? I see no problem here!" Running away instead of facing your problems? Yes, sir'ee, that's me.

When the topic of same-sex marriage came to the table years ago, I was very hands off. I knew both sides were passionate and I knew that I wanted to run away until everything ran its course. That was until Aaron and I found ourselves in Northern California when Proposition 8 came to light. Suddenly I felt like I was in the thick of this issue. I was a Mormon in California when a controversial religion versus constitution battle came to light. Holy moly.

Hate spewed from both sides. I knew people who had their signs vandalized or stolen from their yards, cars were keyed that had pro Prop 8 stickers on them. I saw signs "Jesus Hates Gays," and all sorts of words like "Hell" and "Damnation" written boldly across posters. I felt like hate ran rampant through neighborhoods, pouring over streets, and feeding its way into my home through my TV. Even onto the walls of our church buildings. 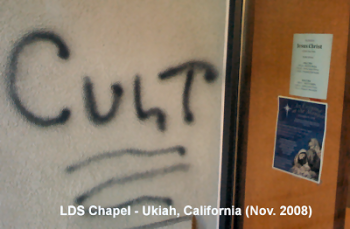 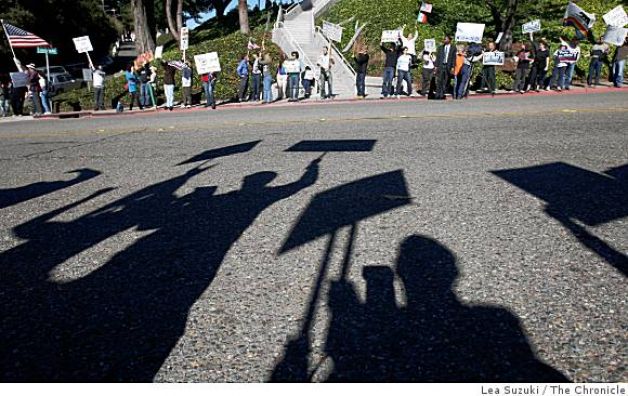 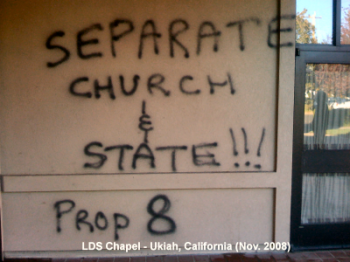 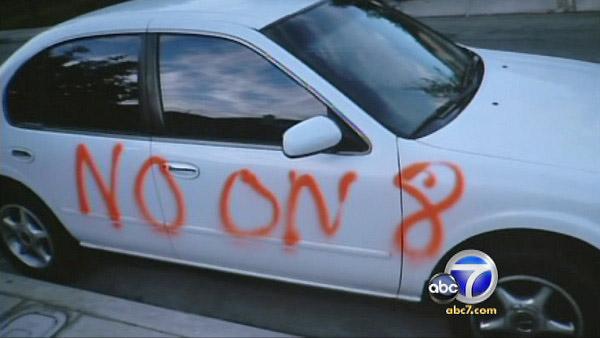 Everywhere I looked there was a fight, and argument, a "how dare you!" being said by either side. I cried when I saw protestors outside the Oakland temple. Temples are one of the most sacred locations to me. But, I felt nothing but hate from a group of people who were trying to "stop the hate." 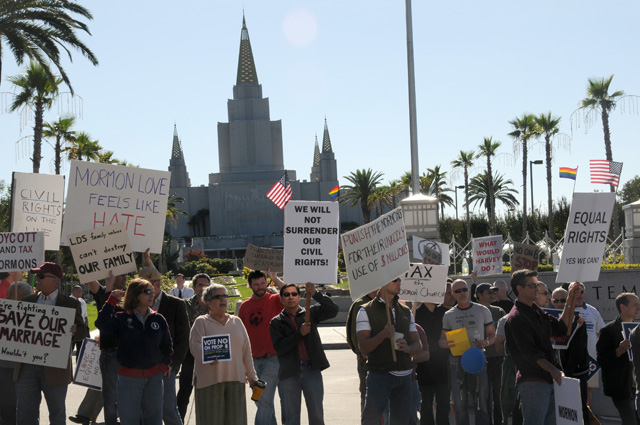 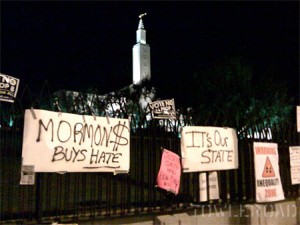 I wanted to crawl into a hole and wait until the air was clear. Let them fight it out, let them deal with it. Let the cards fall as they may.

Suddenly I was thrust into a situation where I had to choose where I stood. We were asked in church to support the fight for pro-marriage. That support came through going door-to-door asking people to support Prop 8, or to call and make the same requests. This came from the Prophet, this was not a local opinion. A letter was read during church from the First Presidency (the leaders of our church) asking for support. It was a peaceful request, not a demanding one. It was not a request of "Support this or go to Hell!" letter. It was a request to support the beliefs of our church. It asked us to support, but it was our choice whether we wanted to participate or not. No one would be shunned or looked down upon for any choice that they made.

At the same time, Aaron and I were living next door to a gay couple. They were incredibly nice, we loved being their neighbors. We ran into them into the parking lot of our apartment complex. Our one neighbor smiled as we greeted him. "Frank and I are getting married this weekend." He beamed, "We're having a party in San Francisco afterwards if you'd like to come." I burst into a "Congratulations, how wonderful!" I was over-the-top with it, in an attempt to mask how complicated I felt about everything. He was so happy, and love is a beautiful thing, I would never want to deny anyone of that. In that moment I especially didn't want him to feel that his news wasn't worthy of an overjoyed congratulations.

My head and my heart were a jumbled confused mess. It was so hard when my religion and the law intersected. Where did I stand with this? How did I feel about this? How can I support my neighbors happiness, but how can I also support my beliefs? I mulled over everything in my heart and in my head for weeks. I stripped away all of the outside noise on the issue and looked within myself and asked, at my very core, what did I believe?

I know that Jesus is the Christ. I believe his teachings. I believe he is a God of love and that he loves everyone. I believe that the Gospel was restored and that, just like days of old, there is a Prophet on the Earth today. I believe that the prophet provides guidance and counsel for us from God through the inspiration of the Holy Spirit. So at the very core of who I am and what I believe, where did I stand?

The Prophet asked for my support of Proposition 8, because that was in support of our beliefs. He asked, he did not threaten hellfire and brimstone, he asked. I believe that he speaks for the Lord, and I chose to follow. I was still a jumbled confused mess about it, but at my core that is where I stood. It was never about hate, ever, it was never because I was closed minded, naive, an ignorant faith follower. It was through quiet introspection about what I know to be true based off of years of spiritual confirmations, earnest study and prayer.

Let me put it into a less controversial analogy. I believe that a person should wait until they are married to have sex. Let's say a law came to light about pre-marital sex. Pretend for a moment that research and support led to a bill that stated that sex before marriage should be illegal. Proposition Abstinence. Where would I stand with this? Well, since I believe that sex should occur after a couple is legally and lawfully married I would support this proposition. Why? Because that is what I believe. Does it mean that I hate all those people who have sex before they are married? No, that would mean I would hate a large majority of people on this earth inside and outside of my religion. Does it mean that I want to deny those people their rights? Of course not. Does it mean that my religion and the Prophet hate those who have sex before they are married. Never, and assuming so would be a drastic misunderstanding. But when the law and my beliefs intersect and a hard line is drawn on the ground and someone says to me "You have to choose," I will choose my beliefs. If the law dictates something I will acknowledge and support the law within this country, but before something becomes a law and I have to be on a side, that is where I stand.

I am assuming that Proposition 8 will be repealed. And when the same-sex couples I know get married I will view it as a marriage. I will congratulate them, be happy for them and respect them for being passionate about their beliefs. In turn, I hope they would respect me for being passionate in mine.