He met me at the Cannon Center, the only place he knew at Helaman Halls. He was standing there in his black track suit, the kind that swish-swished when you walked. I remember thinking "He looks different." He had only been off of his mission for 3 weeks when we saw each other. His personality showed it the most. But he was still Aaron, and talking to him was still easy. I met his brother Joe and we watched Napoleon Dynamite. After the movie we talked until curfew, then he drove me back to the dorms. We talked in his car, talked as we went for a walk around the dorms, and ultimately decided to go to Denny's because it was too cold to keep talking outside. There was no hand holding, no exchanges of affection, but it was definitely the start of something. He needed a school ID and didn't know where to get one on campus and he asked if I could help him the next day.
From that day on we spent pretty much every waking moment together. On the third day we were talking at his house. I don't remember the conversation but it led to Aaron mentioning something about me being beautiful and him leaning in and kissing me. It was the shortest kiss I've ever experienced. As soon as his lips touched mine he jumped up and started semi-freaking out. I was really confused when he told me "This is crazy, you're the first girl I've kissed since before my mission."
I was falling hard for him. Real hard.
I knew within the week that I could marry this guy. I even mentioned to my mom that she might have a daughter get married at 19. To which the response was a thud on the other end due to her fainting (not really, but close enough).
On Easter weekend we took this picture together. The only picture I still have of us then. 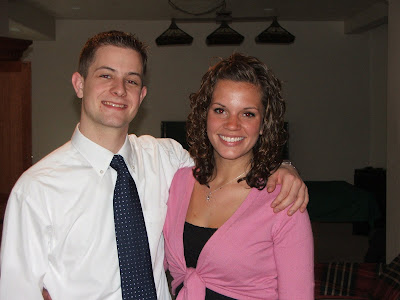 He sent it to his parents in an email (they were still living in Hong Kong). His parents were super nice but warned Aaron that he shouldn't marry the first girl he dated after his mission.
A week later we went to a small reunion of some of Aaron's old mission companions. He spent the evening introducing me as his girlfriend. I was on cloud nine.
On the way home I was giddy and casually posed the question "What are we going to do over the summer? I'm going to miss you so much." I was going back to Virginia until the fall and Aaron was staying in Utah to go to school. He was quiet for a moment and he was completely emotionless when he responded "I think we should break up." That cloud I was flying on got pulled out from underneath me and I fell flat on my face. I was shocked.
I frantically spit out responses like "You don't even want to stay together but casually date other people?!" and "are you kidding me?!" His expression never changed and neither did his response. I was furious. The same night he officially introduced me as his girlfriend was the night he broke up with me. There was more yelling and I'm pretty sure I threw a highlighter at his car.
He dropped me off at my sister's house (where my car was). I walked in the front door and burst into tears. My sister came running to me, she hugged me, and cried with me. Oh, how I love my sister. She was amazing. I spent the next couple of nights at her house, and for the following weeks I played the Backstreet Boys song "Incomplete" over and over and over again. I felt like I was in a movie. The days flew by and blurred together, it was hard to sleep at night, etc. etc. I was dramatic to say the least.
I pulled it together and had fun at the end of the semester. I went home and spent a lot of time with my family, worked, but didn't date. 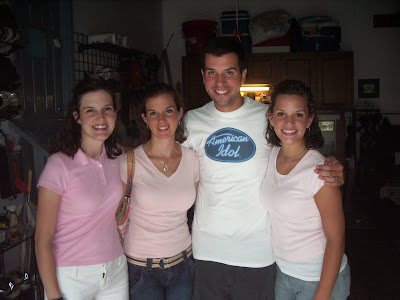 Aaron contacted me via email to see how I was doing. To not seem to eager, I waited two days to respond. He responded to my email 3 weeks later. I thought, screw him. (I found out later that the 3 week wait was intentional because I waited, the stinker)
I went back to school and started my sophomore year. New year, new apartment, a few new roommates. This was going to be my year. 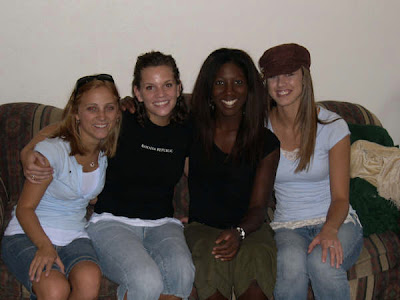 I saw Aaron on campus and my stomach flooded with butterflies. I stalkerishly watched him from behind my newspaper filled with both love and hate.
A few days after that, he called and wanted to come and talk to me. I said okay.
He came by and apologized for how the break-up went. He told me what he had been up to. I was still mad and still in love with him. I gave him the cold shoulder and stonewalled him. It was awkward, there was a lot of tension.
He left and later in the evening sent me a text saying "It was so nice to see you today." I wrote back asking what he meant by that, he said nothing. He called me while I was at a friends house. A similar conversation took place but I asked him "What? do you want to get back together or something?" and he scoffed and said no.
Being the emotionally stable person that I was, I burst into tears. I didn't want anyone to see me crying so I hid in the pantry. My friends brother opened the door to get something to eat. I tried to play it off and be funny so while wiping my tears away I was like "Would you like some pop tarts? Or some sun chips?" It was awkward.
My friend later snuck me out the back of the house and I went home and nursed my emotional wounds.
A month later at my friend's wedding there was talk about who was going to get married next. I laughed and said that I wasn't going to get married until I was 25 and it definitely wasn't going to be to that tool, Aaron.
On October 20th, 2005, seven days later, Aaron called, again.
Posted by Kara at 4:35 PM

I am loving this.... keep it going. PS- love our first picture of us in the first post.

I remember that Easter Sunday.... I loved your outfit.

Um, the next part needs to be posted within the hour!!!! This is WAY better than twilight!!!

Oh, and how did I not know you were like in love with this boy our freshman year and I lived right next to you?

Don't leave us hanging like that. I love this and now I want to write my own "love story" in detail so I can remember.

What happens next??? I know how it ends, but I am loving the story!

I agree with tiffany! the next part better be posted within the next hour ;)

Kara, you are quite the writer. You could be published!

okay, I am LOVING the Aaron Kara story. What a JERK? He broke up with you! Ugh. He better come back around or I'm never going to like him :)

Oh, and Mike and I totally would walk around the dorms all freezing and then have to drive to denny's bc it was after curfew :)

Also, I love that you cried in a pantry. How sad is that?

Where is my next chapter??

Kinda dont like Aaron now even though I know the story ends well:) so hurry up and post! I love it, I totally played songs on repeat and nothing better than Backstreet Boys for a broken heart! Also impressed you came up with something to say in the pantry instead of just sniffling! Glad Aaron made it home!

Chris and I broke up 3 times before we got back together for good (and got married!)

Can't wait to read the rest!

I'm hooked! You have to finish your story soon...I'm still mad at Aaron. :)