The six week baby haze phase is finally over. I don't have an excuse to spend all day in my jammies and not shower, dang. I'm finally starting to realize that there is a life outside of my apartment and there are other things going on besides Gracie, how cute she is, and her schedule. Its weird returning to a sense of normalcy. I'm venturing out on my own without being stressed the whole time and i'm starting to do things that i used to do before September 2nd. Its nice feeling like my normal self and to not be in a delirious sleep deprived stupor all the time. I've even started a new hobby. My friend Lisa Kay taught me how to crochet (thanks also to the encouragement of my friend Diana). Its been really fun to do it although i'm not very far along. How is it that with a baby you feel like you can't find a lot of time to do things, yet at the end of the day you don't know what you've accomplished? 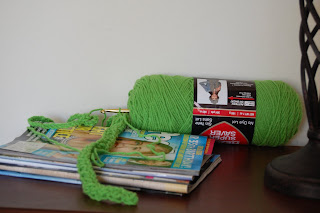 I've also jumped back on the reading bandwagon. Although i have a feeling i won't be able to read as quickly as i could before. My friend Jillian and her sister Ashley raved about these books on their blogs. Thanks for the recommendation ladies. My sister Ashby read them and we decided that the Stringham Girls Book Club would read them before Thanksgiving. I don't know anything about these books other than the fact that people can't seem to put them down. I'm really excited to get into them. 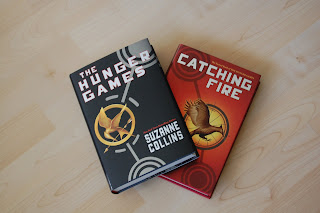 I'm glad that i'm exiting the Baby Haze now so that i didn't miss one of my favorite seasons/holidays. I love Halloween and the festiveness of it all. I'm excited to start cooking soups and for the weather to get colder. 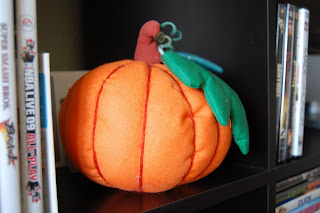 Gracie's Mema sent her this outfit so that she can get into the Halloween spirit as well. 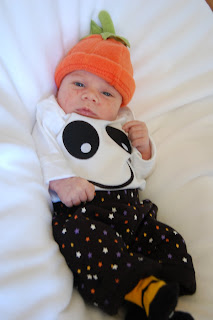 The best part about this 6 weeks is that Grace is smiling. I have also learned that it is next to impossible to get your baby to smile and take a picture at the same time. Here are some of my attempts 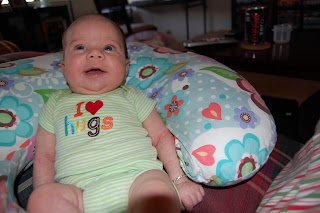 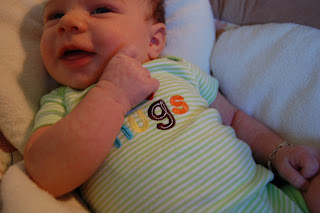 She makes me so happy 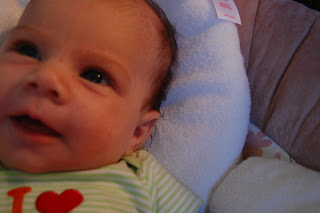 Another Grace tidbit. Grace is a tummy sleeper. Yes, i know what doctors say about it regarding SIDS. But she sleeps better on her tummy, her arms don't flail about, and her mookie stays in. It was hard for me to go against the grain, but its worth it because she sleeps. We have hit a snag with this method however. Grace is oddly mobile. We laid her down to sleep and when she wouldn't stop fussing we went in to see what was the matter. Gracie had somehow shimmied her way from the white rolling pad (seen below) to the top left corner of her crib. Scary. When it happened again we decided to go back to laying her on her side so that she won't crawl around. Its a work in progress. 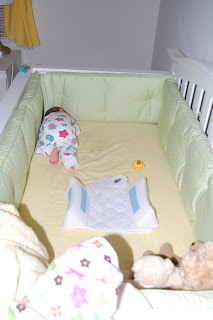 She's too cute, love the halloween outfit!
I totally want to read those books, I have heard tons about them too.
Gracie looks so little in such a big crib, Ella sleeps better when she's smooshed up against the side also, I don't know if it's because she can no longer move around or because it's cozier, either way it's really cute!

Congrats on making it past the first 6 weeks. You did a great job, I was a wreck the whole time! She is so cute. It's nice to feel somewhat human again. It just gets better and better from here.

In the last pictures of Miss Bliss she looks so much like Aaron. Wow. I love her smiles.

Apparently, Ashby was the last person to view your blog on my computer and so when I made MY post it came out as hers. One day we'll figure this out. Anyway, the above post is mine.

Just as I'm going into my miserable state where I choose to stay at home only because I feel like swamp thing, you are coming out of your hiatus. Maybe I'll meet you there in about eight weeks. Grace looks so much like you. That's funny she's a scooter.

So, The Hunger Games was one of my first attempts to read for pleasure since college ruined that hobby. I loved it, kinda weird book, but loved it.

She is the cutest!! Love all her little outfits. Hope to see you soon!

i love all the pictures you posted, but her little bum in the corner of the crib is my favorite!

I just finished reading both hunger game books, they are REALLY good. Have fun!

COngratulations! That is a huge landmark! I can't believe it's been 6 weeks already - and she's smiling! So fun.
Can't wait to see your crochet project!