My parents flew into San Jose for a few days and we have made quite a tourist extravaganza from their visit. They flew in on Saturday morning, and once their bags were unpacked we headed up to San Francisco. We started with a lunch at a restaurant near/on Fisherman's Wharf. It actually ended up being a not very tasty lunch, but the view was amazing. Also notice from the picture that we have a "window seat" which was facing another building and had a cover on it. But we were able to look out the window to the other side of us. 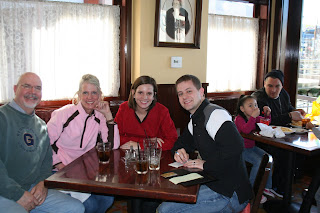 My Parents in front of the marina (this was the view that we had). 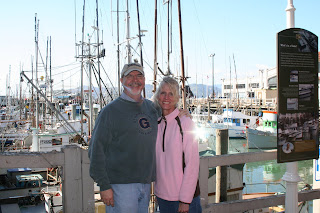 There was a huge Hooters poster in the background, my Dad and Aaron thought they were being funny by trying to put their hands on it. My mom had no idea what they were doing so she didn't tell them to move their hands closer to the picture. It still ended up being a funny picture though because their hands are so far away from the picture but they think they're right on. 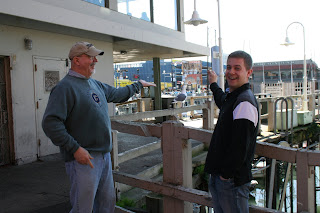 After lunch we headed over to Ripley's Believe It or Not museum. 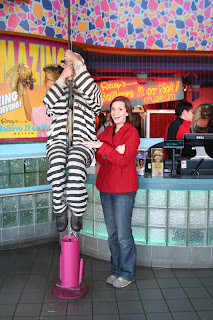 My Dad walking through the spinning tunnel. Although the sides were the only thing moving you could NOT keep your balance, it was really trippy. 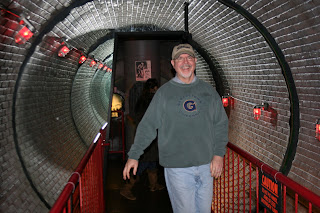 We then visited the stinky seals at Pier 39. There were about 1/3 of the seals there from the time that Matt and I saw them in September. They were still cute though. 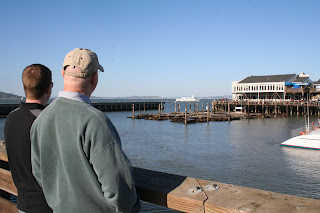 Visiting the Painted Ladies. This is a must if you were a Full House watcher. But i wouldn't recommend going on Saturday because finding a parking spot within a 10 mile radius is almost impossible. 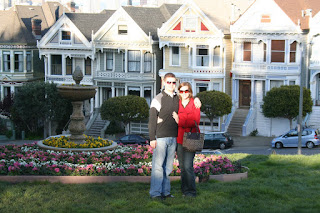 We ended our night by heading off to San Mateo and eating at the Melting Pot. None of us had ever been there before so we thought we would give it a try. It was definitely an experience (an extremely expensive extperience--say that 3 times fast). we got there at 7:45 and left at about 10. I'm glad i did it, but i'm not sure that i would ever go again. 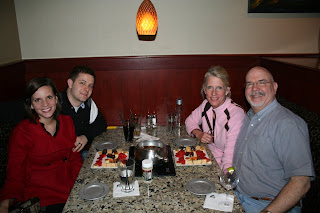 We finally drove back home and pretty much passed out. Day 1 of the San Fran/San Jose fest was a success!
Posted by Kara at 1:13 AM

how fun that your parents came to visit! and what great pictures! i haven't been to san fransisco since i was about 8 and don't remember too much about it. your photos make me want to visit! i love the one of you two in front of the painted ladies, i loved full house! : )