This should probably be divided into four different posts, but since Halloween was 10 days ago. I'm good to combine and move on.

I love dressing my kids up in Halloween themed attire. Pass judgement if you will, but I thoroughly enjoy it.  My sister made, and my mother gifted, this candy corn bow to Grace. Despite it's size, I put it on Grace every opportunity I could throughout the month of October. I die over those Candy corns. 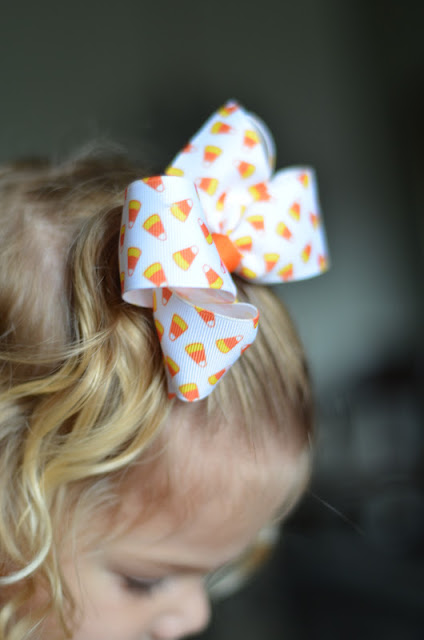 Seriously, its a big bow. My mom is pretty attune to my love of halloween and sent a care package to the kiddos. In it was a pumpkin decorating kit that required zero carving. Grace was in heaven. She played with that pumpkin for days until she dropped it and we had to throw the pumpkin out... 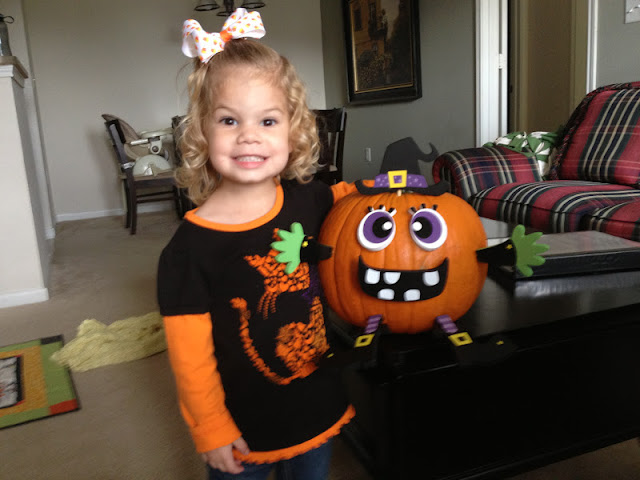 Christian was also properly outfitted thanks to the care package. I had four festive onesies for him and he dirtied three of them on Halloween. Is he trying to tell me something? 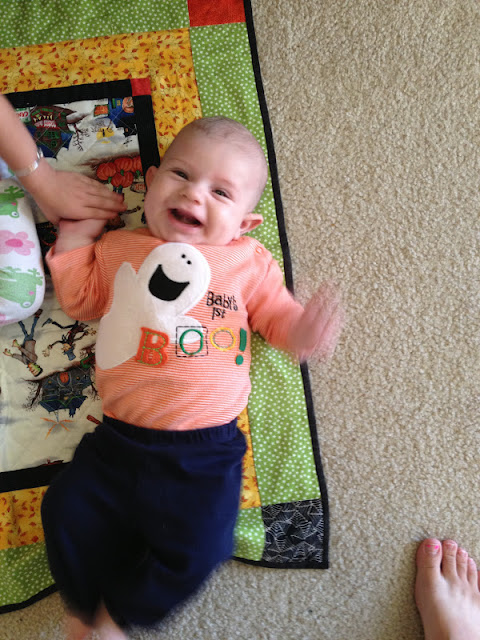 We also made sure to jam out accordingly- although halloween music, however tame it may be, is still a little creepy for a 3 year old. 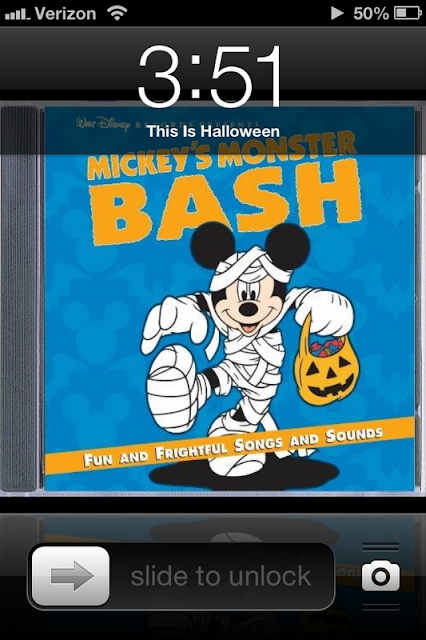 The Saturday before Halloween, our church did a trunk or treat. Grace was Cinderella. I did her hair in a Cinderella bun and I immediately wanted to cry. She looked so grown up with her hair all pulled back. Make time stop, but for reals. 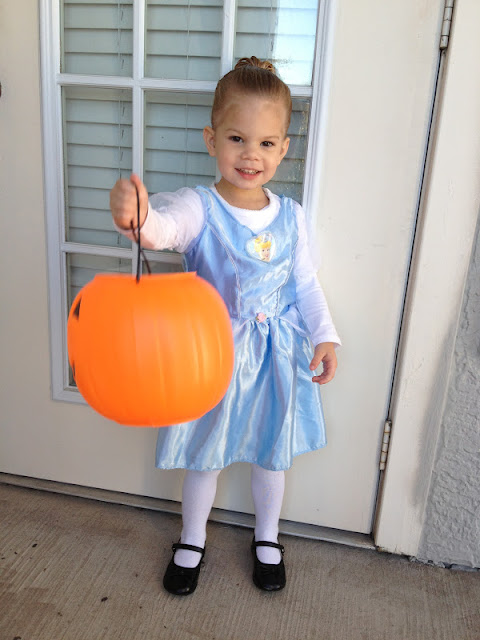 I went as a woman who showers, gets dressed, and actually does her hair. Christian was a lumberjack who, at one point, had boots and a hat on (but you know how those things go when your baby is 4 months old). 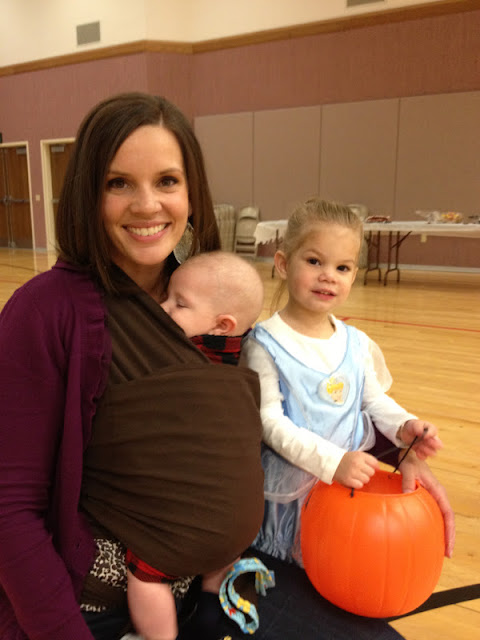 This year Grace totally got it. Car to car, "trick-or-treat", and she even got frustrated with me when I would stop and chat with the candy hander-outers, "Come on Mom! Let's go." She really is growing up.

The day of Halloween was pumpkin carving time. I bought Grace another pumpkin since we had to throw her other one out. We set up shop on an old blanket in Grace's room. After a brief photo-op we got down to business. 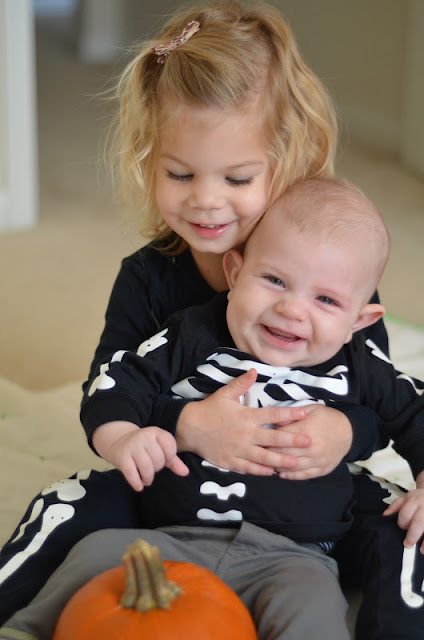 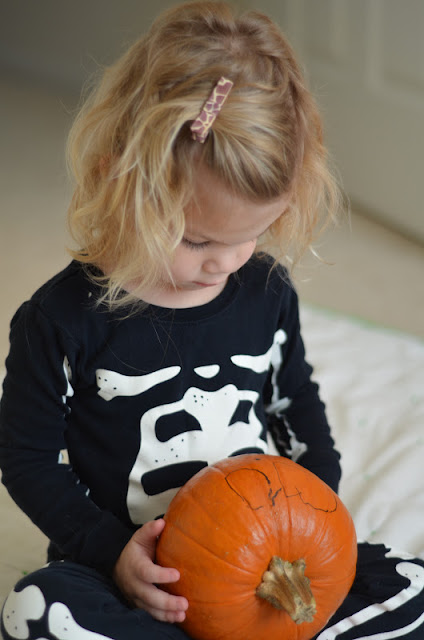 Not too bad for her first time, eh? 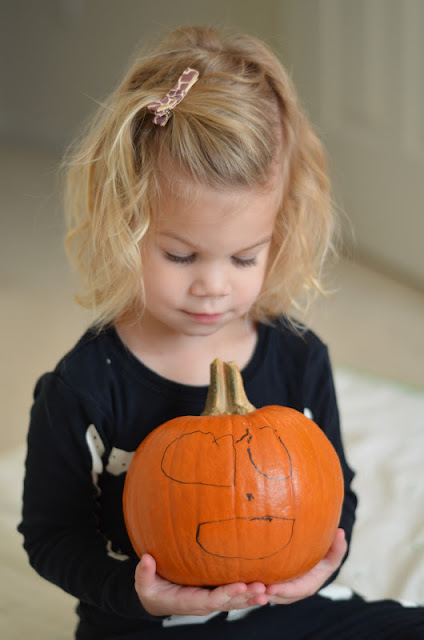 Between the above picture and the below picture there was an incident.... but I'll get to that in a minute. 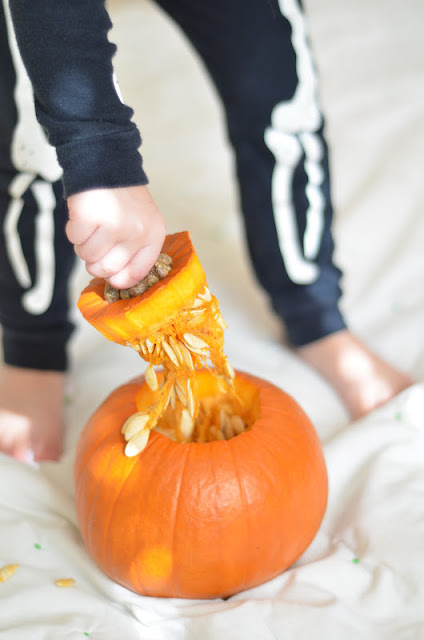 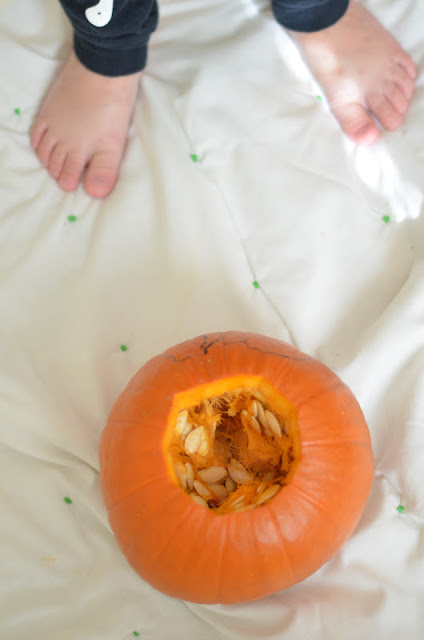 She did not seem to care at all. I thought for sure she would be totally grossed out. 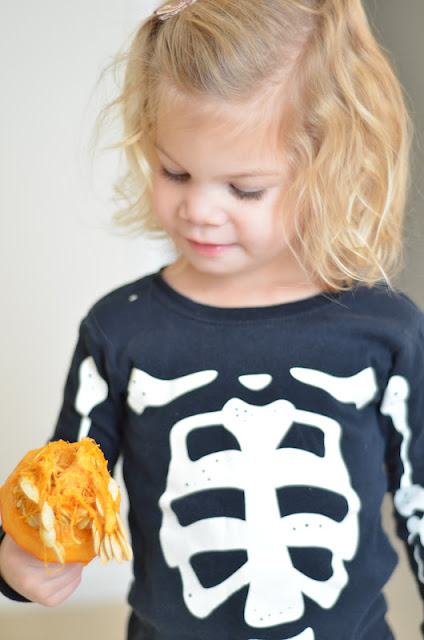 Are you still curious about the incident. Okay, here is the explanation. We were all on the blanket together, Christian laying on the floor and Grace and I getting our carve on. I was taking ridiculous precautions with the knives that we were using, making sure that they were always a safe distance from any child and always out of reach. I was outnumbered 2 to 1 and figured I could never be too careful. When it came to safety my mind was on the knives. After I carved the hole in the top of the pumpkin I wanted to make sure that I had my camera ready for when Grace pulled the top off and saw what was inside. I wanted to capture her reaction. Grace reached down and started pulling the stem off the pumpkin. I quickly reached over Christian to grab my camera, in my hurry to get my camera ready to capture the moment I fumbled it and it fell. But it didn't hit the ground. It hit Christian. My camera hit my baby right on the forehead. I wanted to die. His cry was unbearable. I called Aaron and my Mom in hysterics (I'm kind of dramatic like that), asking all sorts of ridiculous questions about the amount of trauma I just caused my tiny infant. Head fracture? Concussion? Causing an inability to get an academic scholarship to Harvard (which wouldn't happen for Christian moreso due to his parents rather than a camera to the head)? I sent them pictures and pleaded with them to tell me how bad it was. The look on his face kills me. The pouty lip? Worst mother ever. 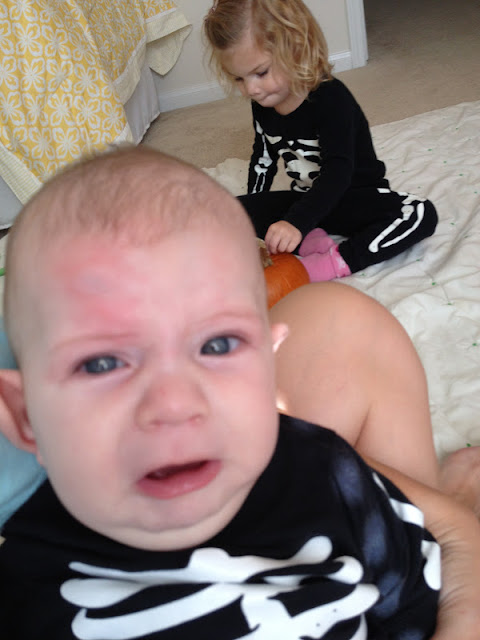 We bagged the pumpkin thing for the time being and I snuggled Christian with a cold compress and watched, like a hawk, for any sign of further trauma- vomiting, lethargy, etc. 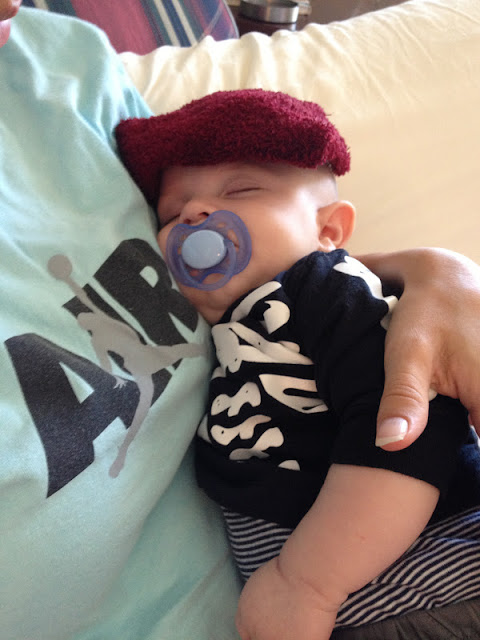 After his nap I reassessed the situation. He seemed just fine, but with a nice big bump and bruise on his head. 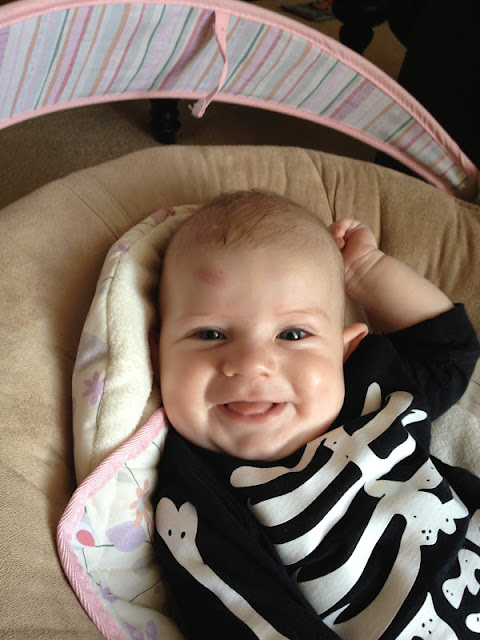 With Christian comfortable and as far away from the camera as humanly possible we got back to the pumpkin, and I was able to properly capture the moment and all its underwhelming glory. Seriously, I thought she'd be more grossed out- or at least excited by the innards of the pumpkin. We carved out the design and Grace's very first pumpkin was born. I think he was a pretty rad little guy. 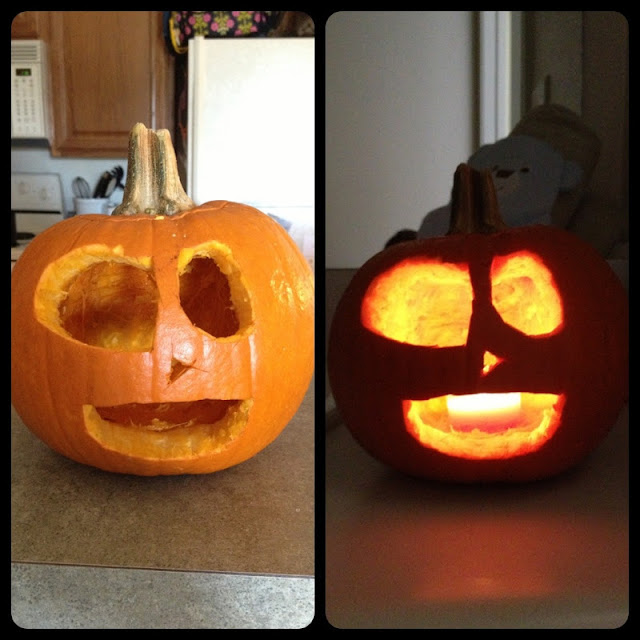 On Halloween night Grace decided she wanted to be Aurora from Sleeping Beauty. 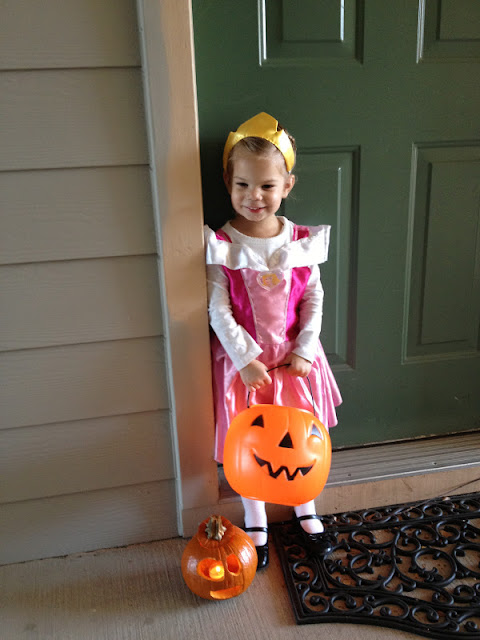 We headed to a nearby neighbor hood to go trick or treating. Everyone sits outside to hand out candy. It was the most efficient way to Trick-or-treat. Grace loved this dog. 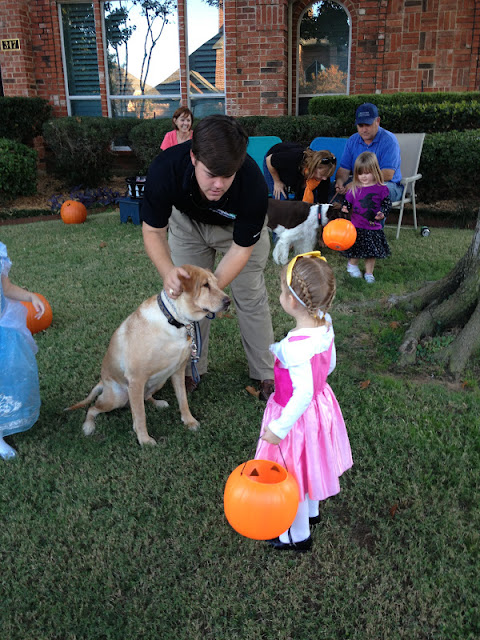 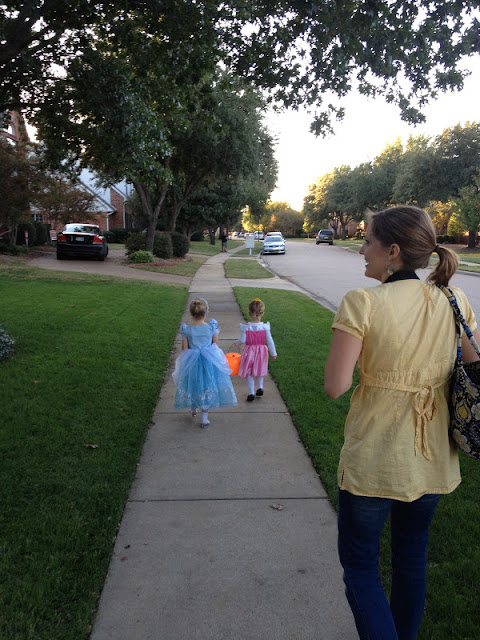 I learned that Grace is quite afraid of Halloween decorations and people in scary costumes. If there was either of those things near the candy bowl she wanted nothing to do with that house. There was a man behind us who was wearing a mask and Grace begged me to hold her when he was near by. I tried to reassure her that everything was harmless and then I thought, "Why would I want to tell her that a bunch of really creepy stuff is totally normal when its not." So I just let her do her thing. She seemed okay with stuff if her friends were cool with it. 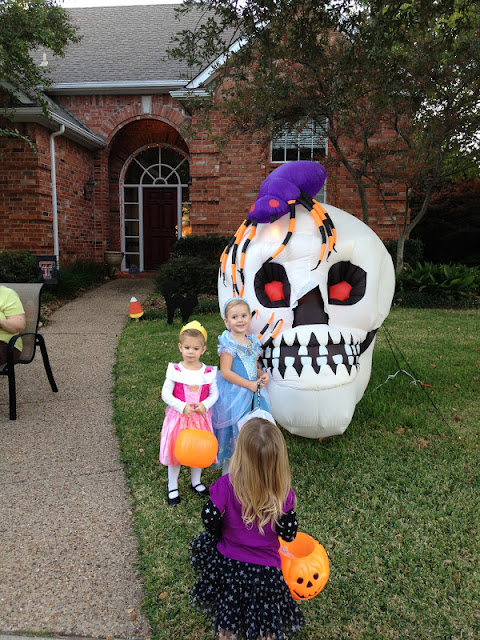 We missed having Aaron with us but it was a fun Halloween. I can't believe the season is already over.
Posted by Kara at 11:50 PM

Poor Christian! And you! When Peyton was about a month old I dropped a small Frankenstein snow globe thing on her face. I know how bad you felt! And about the head fracture- yup, shes got one of those right now. These kids, I tell ya!